MILWAUKEE — If there’s one thing Olivia Menzia knows how to do, it’s sprinkle kindness around like, well, sprinkles.

That’s how her business was born, after all.

During her senior year of college at Marquette University, Menzia got an ice cream machine for Christmas. She started spinning her creativity into making new flavors to share across campus. She’d take homemade ice cream to class, parties, potlucks or just have it on standby when her friends came over.

One day, her friends came over to her apartment. But most of them passed on the freshly made scoops.

“More people couldn’t eat the dairy ice cream than could,” she said. “I was like, ‘Okay, I gotta try and make a dairy-free ice cream for the next time they come over.’”

She served her new creations to her friends who could have dairy too, but didn’t tell them their sundaes were missing milk.

Menzia said they were shocked.

It took just five people telling her she should sell it to convince her.

She started taking orders for friends and strangers alike around campus. Her ice cream machine at the time could only make four 12 oz. containers at once, but she topped 100 orders overnight. She’d start the process in the morning, go to class, check on her ice cream, study and come back to finish it up before dropping them off around campus.

Liv a Little, serving up vegan ice cream, was born in her college apartment in 2019. 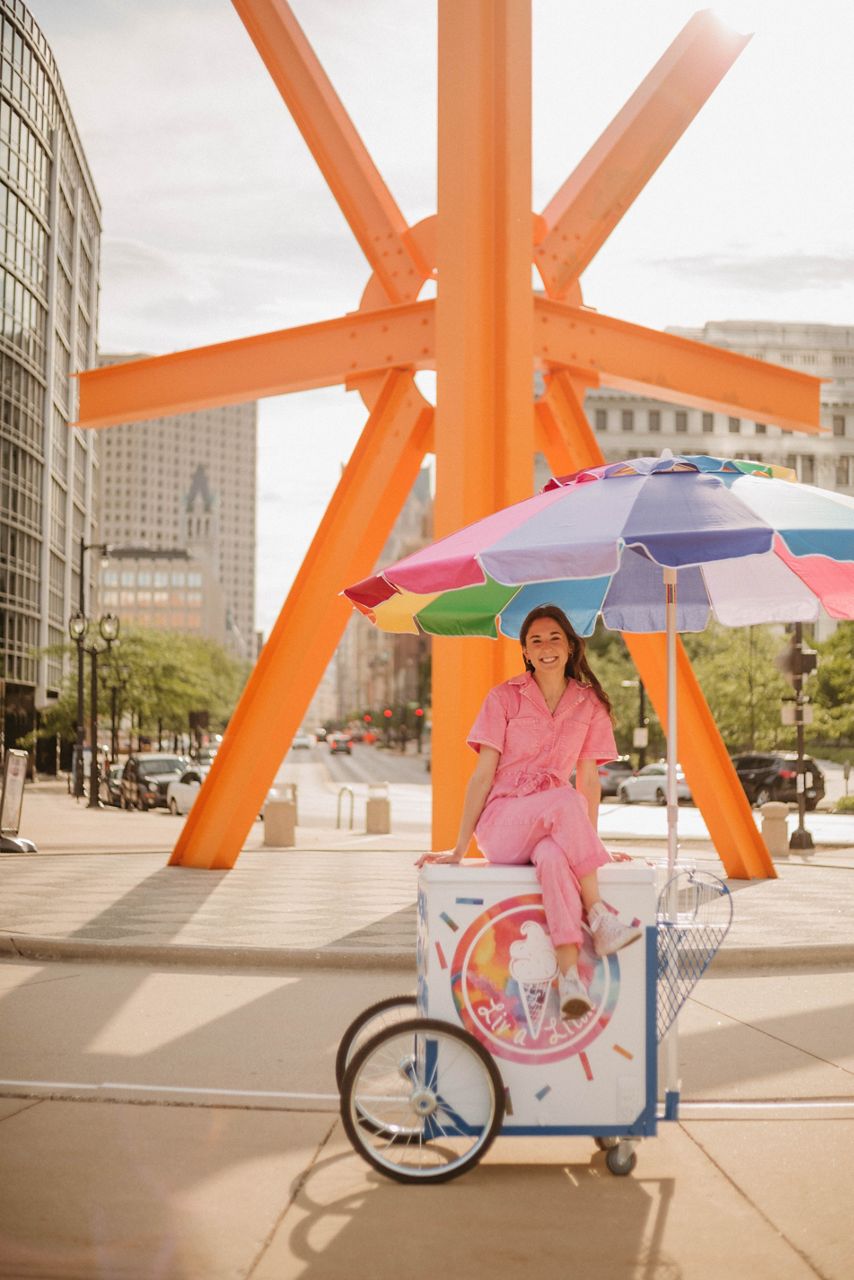 Menzia is not vegan herself, but said everyone should be able to indulge in a sweet treat from time to time.

“I want to become the inclusive ice cream that’s worth it. Whether you’re vegan, dairy, peanut or gluten free, I am here to create an ice cream that is just as tasty, nostalgic and fun as the other 31 flavors in the freezer,” she said.

When she graduated in 2019, Menzia got a job in graphic design. But she wasn’t ready to set down her scoop just yet, so she kept working on Liv a Little on the side.

Then the pandemic hit.

She got laid off from her design job at Summerfest.

“It kind of pushed me to do more with Liv a Little,” Menzia said. “It was the push to start taking myself more seriously… I think I needed that foundation in order to really make it grow.”

That’s when she developed more flavors, got licensing, found a food kitchen and jumped into wholesale.

But the pandemic brought on its own set of challenges, too. Supply shortages of oat milk and oat milk creamers forced her to change the base of some of her ice creams: A tricky process when you’re trying to make sure as many people can enjoy it as possible.

Her fiance, who works with her at Liv a Little, put his science and engineering skills to work and figured out how to make a new oat milk that matched what Menzia had previously used. Menzia said now, it’s even better than what she’d previously used.

“It’s made our product cleaner and better,” she said.

Eventually, Menzia landed another design job. She currently works as a social media content creator and designer for Ulta Beauty, but when she clocks out is still all about Liv a Little. On any given night she could be in her space at a downtown food kitchen, doing pop ups, setting up at city events like Night Market or even catering a wedding.

“It has been really really cool — that people want me at one of their most important days of their life. It’s kind of crazy,” Menzia said.

“I’ve been doing market research since I was born: I’ve been eating ice cream for my whole life, like aggressively,” she said.

It makes sense: Her dad scooped ice cream as a high schooler and her grandpa drove an ice cream truck.

Menzia said she tries to think of what flavors she’s never seen in an ice cream shop, but knows she’d order if she had the chance.

“A lot of it is nostalgia. The big reason why I have [Strawberry Pop Tart Pie] and a Cap ‘n Crunch flavor [Toasty Coco Crunch], is because those are things that I loved when I was little,” she said. “I would go to the grocery store and be like, ‘Oh a strawberry Pop Tart would be really good right now, but I don’t want the whole box. I just want two or three bites. So what if I put it in ice cream?’” 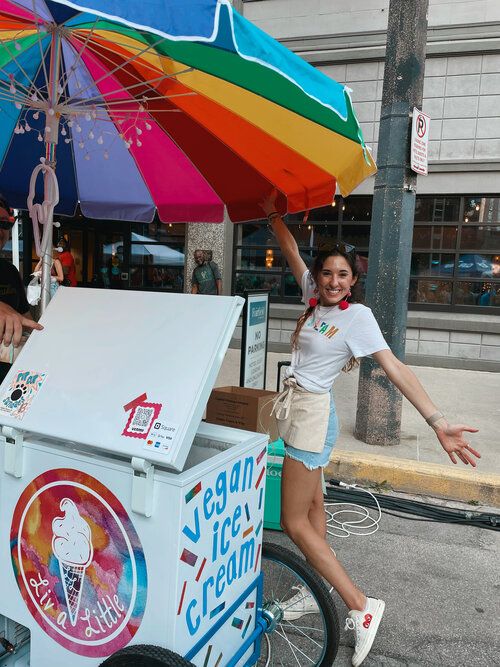 (Photo courtesy of Liv a Little)

Of course, there’s classic flavors in rotation too such as Small Mighty Mint Chip, Cookies and Cream City and Cookie Crumbles.

While Menzia admitted she’s proud of her lemon and blueberry ice cream, she gets most excited about the new flavors. She said right now, that has to be Muddy Paws.

But Menzia has a lot of other things to be proud of, too.

Menzia said the vegan and dairy-free industry is booming, and she thinks it’s here to stay. Especially, as she pointed out, a lot of people eat those diets because of allergies.

“You can’t really change if you’re allergic to milk,” she said.

Milwaukee, she said, was a little behind the curve when it came to hopping on the vegan and dairy-free food trends compared to other regions. But that worked in her favor: She was one of the first to tap into it.

“After the initial traction, I had no doubt it in, but it certainly grew quicker than I thought,” Menzia said. “It’s a great problem, but it’s the constant problem of I can’t reach the demand. I can never make enough.”

That’s why, she said, while she wants to open a storefront one day, or maybe even drive an ice cream truck, she’s okay with keeping her business contained to her cart for now. She said she wants to grow Liv a Little a little bit more.

As the business has grown, so has Menzia. She didn’t go to school for business, but starting her own has expanded her horizons.

Beyond that, though, Menzia said she’s blossomed as her business has boomed.

“I’m more self-aware about what I actually want,” she said. 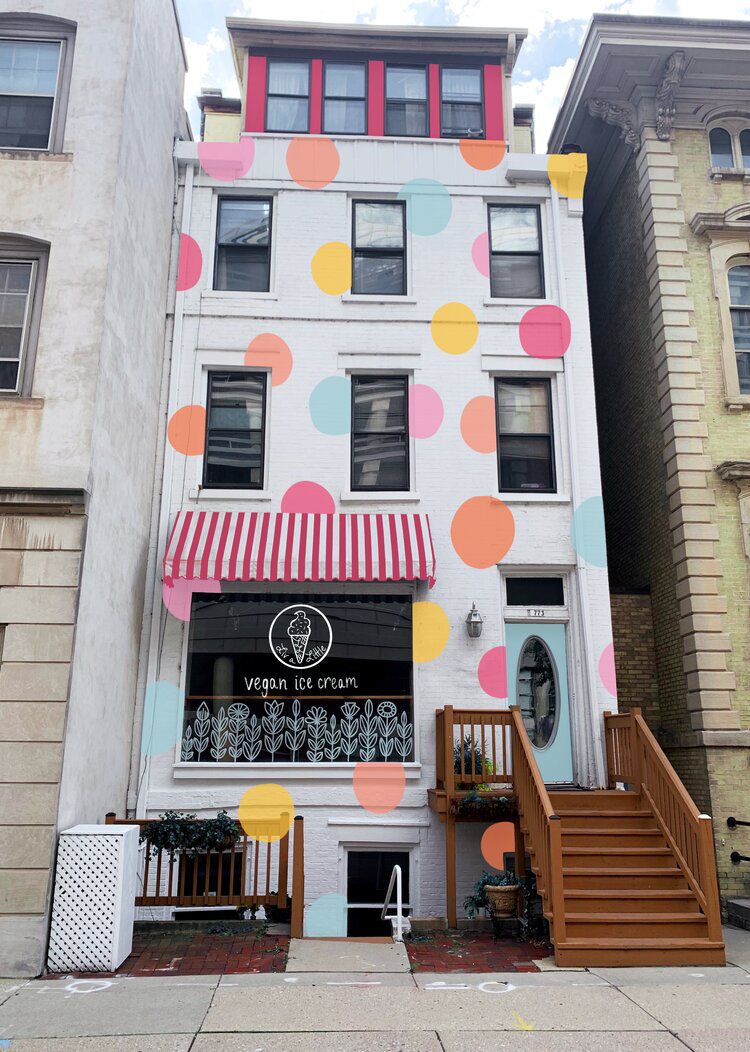 She said a year ago, if someone has asked her when she wanted to open her storefront, she would have said as soon as possible. But now Menzia said she knows she needs to wait for the right opportunity. But she said has a supportive base of people around her — business wise, personally and customer wise — to build from.

“Getting a shop is like getting married, if not crazier. You can’t move the shop; you could obviously move with your significant other,” Menzia said. “I don’t think I’ll have problems making a commitment in five years, but I’m young. I’m in my 20s.”

She said she has businesses boom during COVID-19, but they weren’t able to sustain. She said she leaned from their mistakes to pace herself.

“There’s no reason to rush the journey of the business,” she said.

But she does know one thing: Her and her fiance want to stick around the Milwaukee area.

“At the end of the day, [Milwaukee] is where [Liv a Little] and I will end up,” she said. “It feels right. That’s where it grew — that’s where the base customers are.”

She did note, she’d be open to pop-ups outside of Milwaukee, particularly in Illinois, where she’s from.

A lot of work is ahead, but Menzia has never been one to freeze in the face of a challenge. She’s now a self-proclaimed “yes” person.

“No day’s a restful one unless it’s the winter,” she said.

Catch Liv a Little at Washington Park Wednesday on Aug. 31 or at the Sept. 21 Milwaukee Night Market.