As crypto investors become more aware of the environmental impact of different blockchains, it could lead to a backlash against energy-intensive cryptocurrencies such as Bitcoin (BTC 0.51%), which now consumes as much energy as a mid-size European nation each year. Already, some countries have banned Bitcoin mining entirely, and some U.S. states have threatened to do the same. In September, the White House even published a report highlighting the negative environmental and climate effects of Bitcoin.

It’s perhaps not surprising, then, that some investors are increasingly on the lookout for green, eco-friendly cryptocurrencies that could one day replace Bitcoin. Three green cryptos that should be on your radar include Cardano (ADA 2.45%), Algorand (ALGO 0.66%), and Tezos (XTZ -0.14%). All three use energy-efficient, proof-of-stake blockchains, and all three were highlighted in the White House report.

Since its launch back in 2017, Cardano has stood out as an energy-efficient, proof-of-stake blockchain. In fact, until Ethereum (ETH 2.57%) transitioned from a proof-of-work blockchain to a proof-of-stake blockchain earlier this year, Cardano was the poster child of what is possible with a sustainable, environmentally friendly blockchain. Cardano has consistently received praise from organizations tracking the green credentials of blockchains. In the White House report on crypto assets, Cardano showed up as one of the top blockchain performers in terms of electricity usage and greenhouse gas emissions. 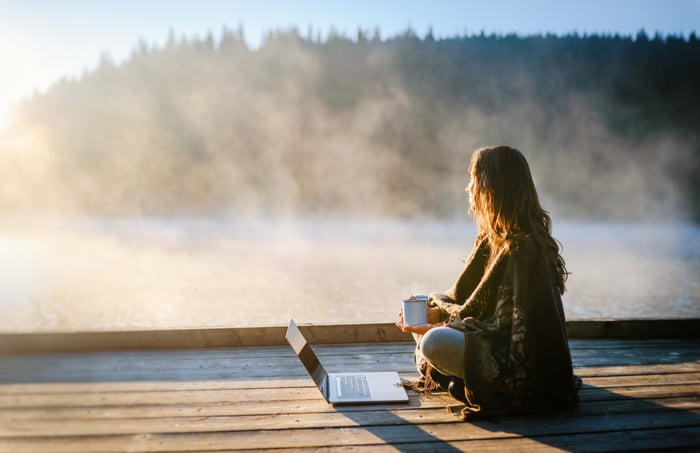 Add in the fact that Cardano offers much of the same functionality as the Ethereum blockchain, including smart contracts, non-fungible tokens (NFTs), decentralized finance (DeFi) protocols, and decentralized applications, and it’s easy to see why many investors are excited about Cardano. The big stumbling block for Cardano, of course, is that few high-profile businesses actually accept Cardano as payment right now. For Cardano to overtake Bitcoin one day, it needs to be much easier for people to make transactions with ADA.

Algorand, founded by award-winning MIT professor Silvio Micali, has been at the forefront of implementing a green crypto strategy to attract new users, developers, and investors. For example, for Earth Day this year, Algorand blacked out billboards in New York’s Times Square as a way of bringing attention to its environmentally sustainable blockchain. Algorand has also won acclaim as the world’s first carbon-negative blockchain. Algorand is now a top-30 crypto by market capitalization, as well as one of the most highly regarded Layer 1 blockchain networks.

Algorand has found a number of clever ways to reduce the environmental impact of its blockchain. For example, in order to maintain its carbon-negative status, it now uses a portion of its network transaction fees to purchase carbon credits. It also uses smart contracts to offset the carbon footprint of every transaction. As a result of efforts such as these, Algorand was one of just a handful of green cryptos highlighted in the White House report.

Tezos is definitely the dark horse candidate to overtake Bitcoin one day. That being said, it is now a top-50 crypto by market capitalization and has partnered with a number of high-profile partners and sponsors (including Red Bull Racing, the New York Mets, and McLaren) to widen its name recognition on a worldwide basis. While it is still earning its chops as a top Layer 1 blockchain competitor, Tezos appeared in the White House report as a shining example of what a blockchain could be.

Tezos is best known for bringing mainstream attention to the carbon footprints of different cryptocurrencies. In 2021, for example, Tezos partnered with the University of Cambridge on a decentralized carbon credit marketplace to support global reforestation efforts. It has also earned recognition from PwC for its efforts to become an energy-efficient blockchain. Topping it off, Tezos has also raised public awareness of environmentally friendly NFTs.

Should you invest in green cryptos?

The big question, of course, is whether a green crypto investment is a good crypto investment. Simply investing in a crypto because it is doing good things for the environment is not enough. However, when a green, eco-friendly strategy is layered on top of a business strategy that makes sense, the choice is a no-brainer. One example might be Ethereum. As a result of The Merge, Ethereum’s energy consumption plunged by 99.9%. That’s a huge “green bonus” to get for tremendous gains in speed, efficiency, and transaction throughput capacity!

The idea of a green, eco-friendly crypto ever overtaking Bitcoin might sound preposterous. Fair enough. But just consider what has happened in the automobile industry, where some states are now looking to ban gas-powered vehicles, and where electric vehicle maker Tesla (TSLA 1.52%) now commands a higher market cap than Ford (F 2.00%) and General Motors (GM 1.81%) combined. That would be the equivalent in the crypto world of a new green crypto passing Bitcoin and Ethereum in terms of market cap!

So keep your eyes on what’s happening in the world of crypto. An epic paradigm shift might be coming sooner than you think as investors become increasingly aware of the climate and environmental impacts of crypto. When that happens, these green cryptos could soar in valuation.