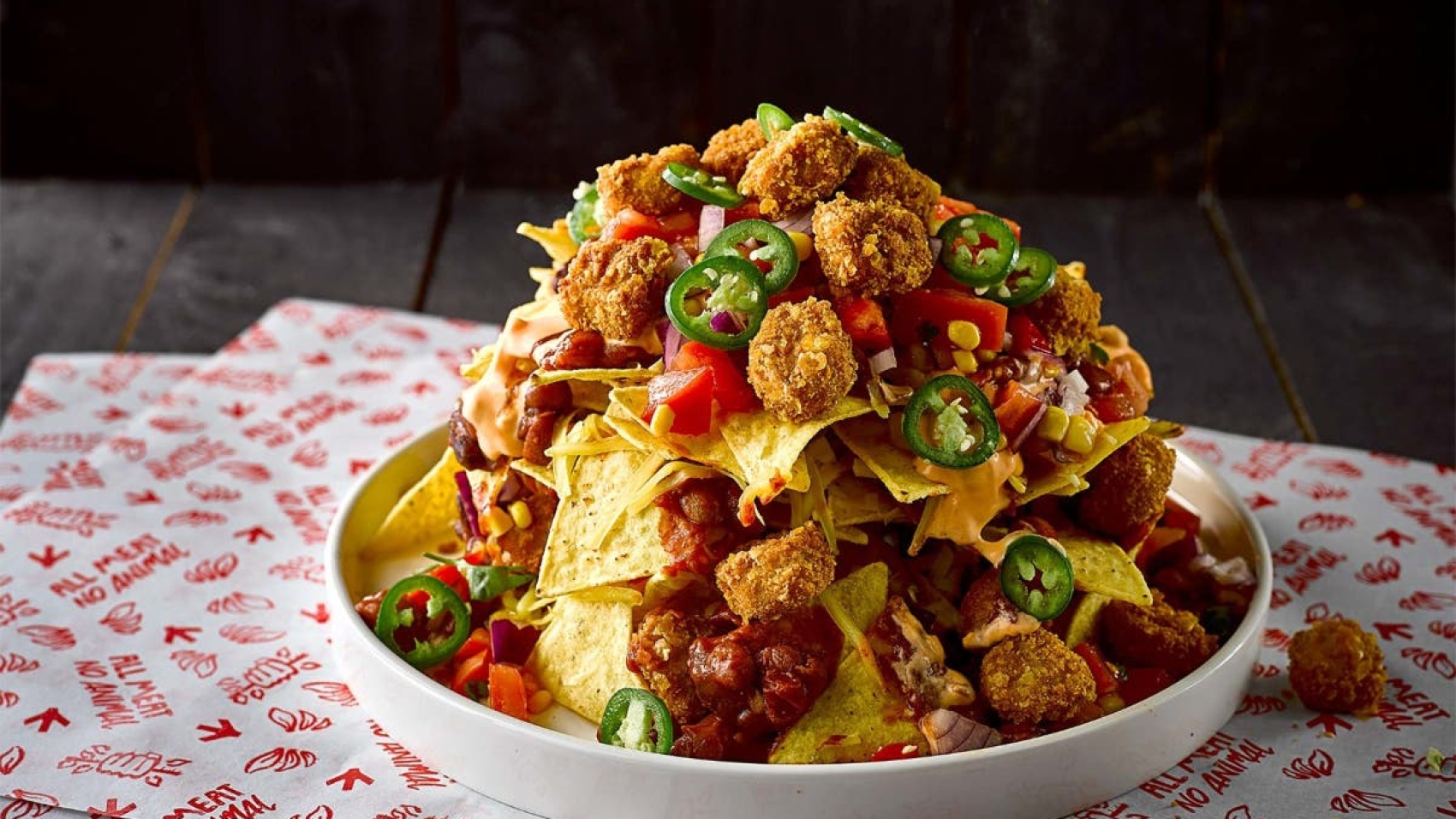 While I watched the chilled host on the Macy’s Day Parade television broadcast talk about Tofurky as a vegan Thanksgiving substitute, I can’t say I was enamored. A little too bland, a little too texture-challenged for me. But this month I had an offer to test out VFC (Vegan Fried Chick*n), the company self-styled as the “world’s most rebellious and innovative vegan food company,” and I decided to give their products a try.

And why not? The company is on a mission to continue to save the chickens and put a stop to factory farming. What better time could it be to support a new entry into the meat-free revolution than during this holiday season, with Thanksgiving morphing before-you-know-it into Hanukkah, Christmas, and Kwanzaa? It made sense to see if this new alternative food company could fit into the next round of celebrations that are so centered on sharing food with the ones we love.

I think it’s important to recognize efforts to reduce the climate impacts of agriculture, which are enormous. The way we produce our food is responsible for one third of human-caused greenhouse gas emissions. Moving human diets from meat to plants means less forest is destroyed for pasture and fodder growing and fewer emissions of the potent greenhouse gas, methane, are produced by cattle and sheep.

Over the years, I’ve seen many meat substitutes appear in freezer and refrigerator cases, and lots of them have faded due to bland tastes, strange textures, and out-of-reach expenses. But in the last 2 years, a whole new series of plant-based foods has captured the interest and tastebuds of consumers. The result of intensive food engineering and culinary expertise, these foods are making headlines.

Now a new vegan food company has come to the attention of CleanTechnica. The vegan food company’s press release says that VFC’s juicy and flavorful chick*n alternatives show that the company doesn’t believe in sacrificing chickens, but that…

I pre-heated the electric oven to 375 degrees then cooked each of the 3 offerings for about 20 minutes. To round out the meal, I assembled a green side salad with olive oil and balsamic vinegar. I boiled brown rice pasta, dotting it upon serving with Earth Balance. Both were innocuous side dishes with flavors that would not compete with the new products.

Popcorn: This VFC selection has a crisp crust with a pleasant light spicing. Its mild flavor definitely adds to the popcorn’s overall taste and texture. I dunked the popcorn kernels in hoisin sauce, which seemed like a good match. I could envision a big bowl of these at a party, surrounded by small ramekins of dipping sauces — bleu cheese, hot, ranch, sesame, barbecue. It was my family’s favorite item of the three we were offered to taste test, due to the ratio of spiced crust to filling. The menu suggestion for nachos in the picture at the top of this page looks like it also would be quite inviting use of the product.

Bites: These are a slightly larger size in medallion shape than the VFC Popcorn. The filling becomes more central to the palette in this selection than it had been in the popcorn variety. I dunked it in peanut sauce, which tends toward a bit more heat than hoisin, and the Bites needed that enhancement. It is less crunchy than the Popcorn, so it has less of that delectable crust. I’d recommend adding more crust crunch to this selection.

Filet: This is the largest portion size of the 3 items, best suited as an entree. Its taste and texture fall halfway between the Popcorn and Bites, as it has a bit more crust than the Bites but less than the Popcorn. I can imagine it as a central item in a sandwich with lettuce and tomato with vegan tartar on a big oversized bun. The Filet was quite filling, a meal in itself.

Overall, the VFC (Vegan Fried Chick*n) Filet was pleasant with no aftertaste, very lightly flavored, not overpowering, actually a bit mild. I feel none of the items — Popcorn, Bites, or Filet — can stand alone; they need an accompanying sauce to add taste interest. The company might provide small packets of appropriately matched sauces for customer ease.

Would I buy these VFC vegan foods? Sure, as the cornflake crust is a real winner. Each of the products would fit into existing recipes nicely.

Is VFC, as proclaimed in the press release, “the most classic and nostalgic meal experience that tastes and feels as good as traditional fried chicken?” Um, no, sorry. Traditional southern fried chicken has a really thick and crunchy crust with an interior (albeit dead animal) protein that is moist. Does this vegan food company have potential, though? Oh, yeah. The crust is already a winner, and, with continued refinements to increase its thickness across the Bits and Filets products, it has real potential to get close to the memorable yummy fried chicken that Grandma made (before we knew how bad it was for our health).

Another point to be made in this vegan company’s favor is that it is incorporating a whole lot of real vegetables into its product recipes. So often, alternative meats get critiqued for being too chemical-based or processed.

Moreover, lots of people think that veggie food doesn’t have enough protein, that one must eat animals in order to stay healthy. This vegan food company offers products relatively high in protein — 19g of protein per 100g.

At a time when conglomerates are buying up alternative meat companies, it’s good to see another set of plant-based meat and dairy products available to us, knowing that they’re better for human health and the environment than eating meat — by far. Don’t want to miss a cleantech story? Sign up for daily news updates from CleanTechnica on email. Or follow us on Google News!

Have a tip for CleanTechnica, want to advertise, or want to suggest a guest for our CleanTech Talk podcast? Contact us here.