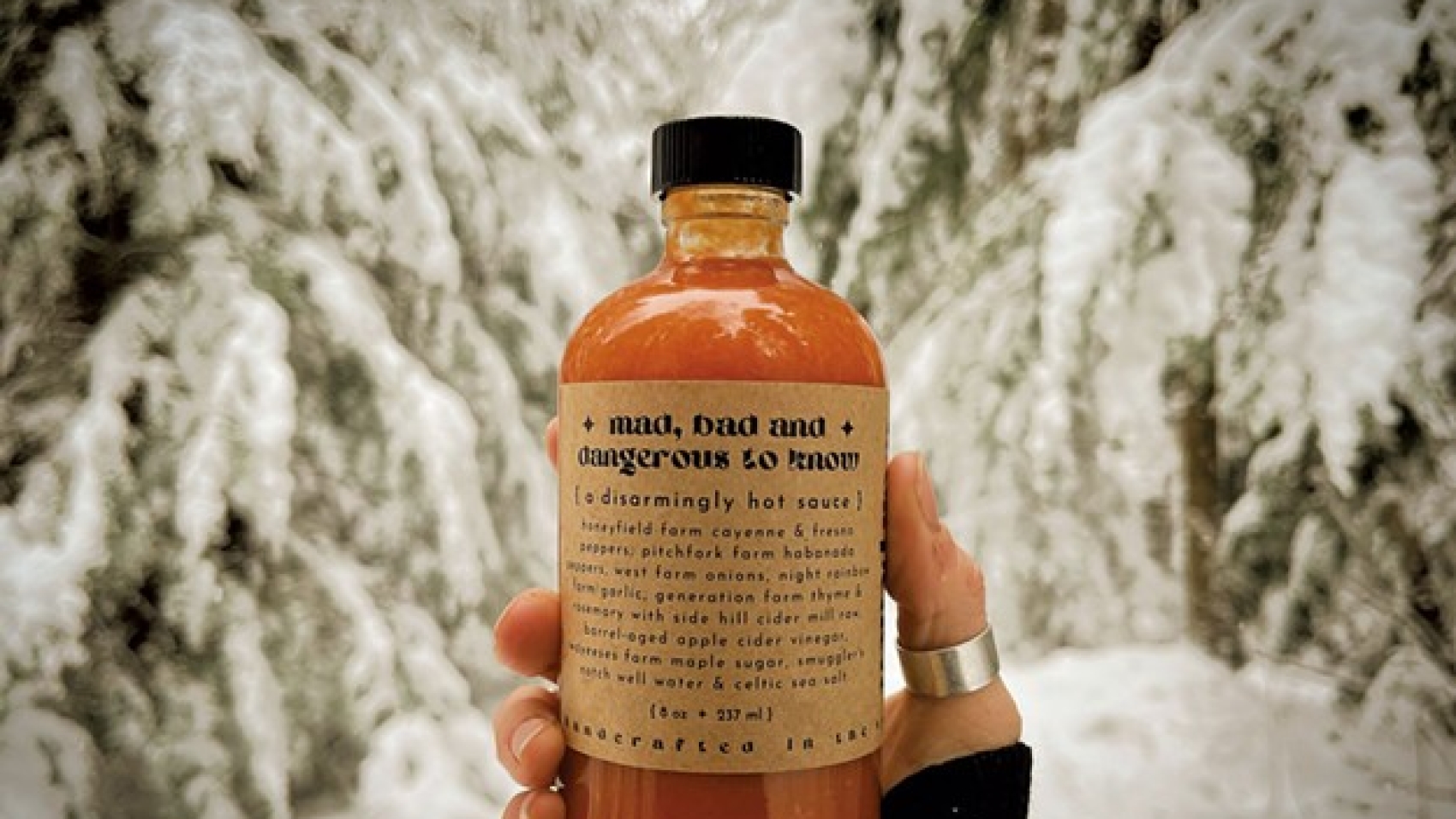 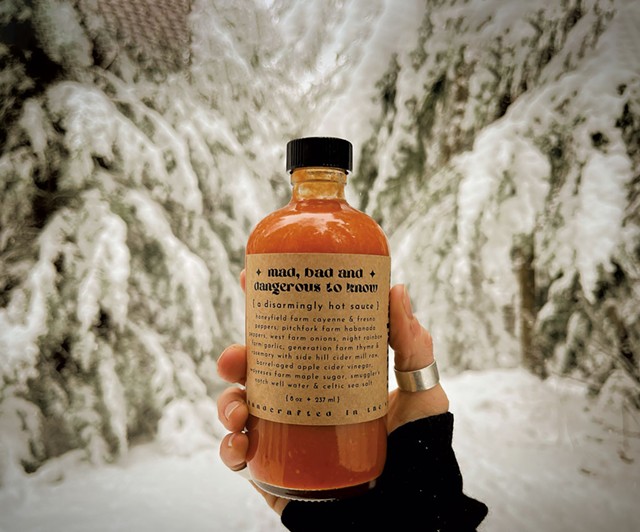 Five years ago, Fiona Lucia Genadio-Allen trained at Ireland’s illustrious Ballymaloe Cookery School. The immersive education — which she called “Hogwarts for food” — was centered on a 100-acre organic farm and gave her the skills she needed to cook professionally at restaurants in London.

But even in those prestigious culinary circles, the young chef didn’t find what she was looking for: medicine in food form.

“I’d get really frustrated working in kitchens,” Genadio-Allen, 30, said. “Like, Why are you using this shitty salt when you could be using amazing, mineral-rich Celtic sea salt?”

As a teenager in Vermont, Genadio-Allen was interested in herbalism, developing her knowledge of powerful plants through independent study, mentorship and programs such as the Vermont Center for Integrative Herbalism. She often made tinctures for her family to try, but they weren’t sold on the bitter flavors.

“That’s the thing about herbal medicine,” Genadio-Allen said with a laugh. “A lot of times, it doesn’t taste very good.”

After attending culinary school, she found herself thinking more and more about producing herbal formulas that people would actually enjoy. In 2021, Genadio-Allen returned home to Vermont and launched Wolfpeach, a Morrisville-based apothecary kitchen with an online shop.

Wolfpeach offers a full line of oxymels, tonics, aromatic salts, honey-and-herb electuaries, digestive bitters, and hot sauces. Barring the Celtic sea salt, almost all the ingredients are sourced from Vermont farms. The result is a rainbow of pantry staples that are as tasty as they are beneficial — and they’re popping up like bright beacons at bars and restaurants around the state. 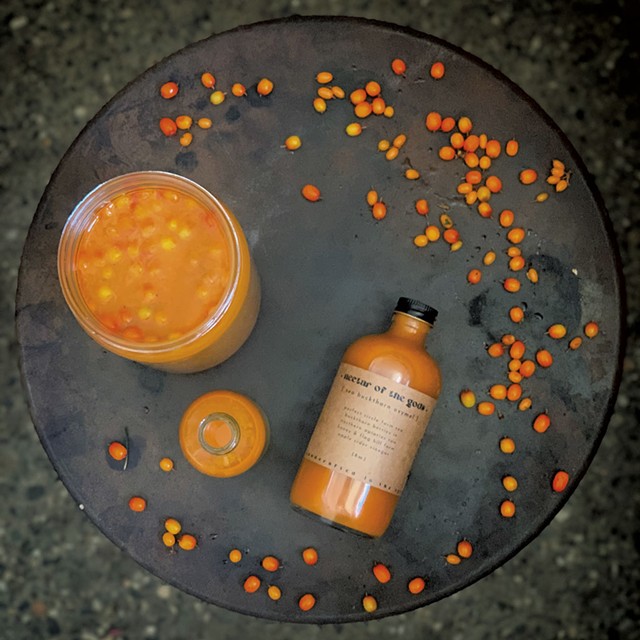 Wolfpeach’s most popular product is Nectar of the Gods, a citrusy, bright-orange oxymel made with sea buckthorn berries, raw honey and raw, barrel-aged apple cider vinegar. Oxymels are ancient tinctures that predate alcohol distillation, Genadio-Allen said, combining vinegar and honey to extract medicinal value from plants and preserve their flavor. She describes Nectar of the Gods as a vitamin C-rich “vitality tonic” that can be consumed on its own or in a mocktail or cocktail.

“The oxymels are really easy [to use],” Genadio-Allen said. She often makes a zero-proof cocktail by throwing a splash of Nectar of the Gods in with sparkling water on ice and adding a pinch of Mermaid Dust, a pink-and-purple aromatic salt with rose petals, calendula and seaweed. The combo of vinegar, honey, water and salt creates a full-spectrum electrolyte drink, she said. To booze it up, she adds a shot of good gin and moves the salt to the rim.

Genadio-Allen started her biz by selling products at farmers markets in Waitsfield, Stowe, Burlington and Winooski. Now that she has an established customer base, she’s shifting her focus to supplying drinking and dining destinations around Vermont, including the Oasis in Morrisville, Doc Ponds in Stowe, Zenbarn in Waterbury Center and Hearth & Candle in Jeffersonville. 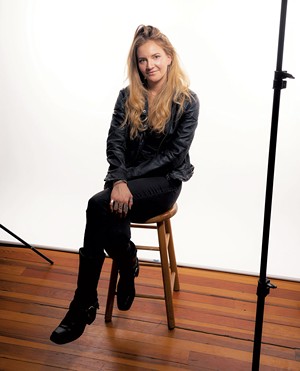 “I’m really motivated to get these products behind the bar,” Genadio-Allen said. “Why not have medicine while you’re imbibing, especially if it tastes good and looks beautiful?”

Genadio-Allen is also bringing her products to the table through multicourse pop-up dinners that feature Wolfpeach offerings in the cocktail menu and infused into the food. In December, she hosted a Nordic feast with Haley Blair of Stowe’s Live Forever Foods, a friend and frequent collaborator. Upcoming events include a Burns Night celebration at Zenbarn on Thursday, January 26, and a meal with Abenaki chef Jessee Lawyer at the helm in mid-February.

At Ballymaloe, Genadio-Allen learned from cofounder Darina Allen that “menus really drive change in the culinary and agricultural world,” she recalled. In other words, when diners try something new at a restaurant, they’re more likely to seek it out elsewhere. She hopes that having Wolfpeach’s products on menus around Vermont will draw attention to them, she said, and to the farms that she sources from and proudly showcases on each label. 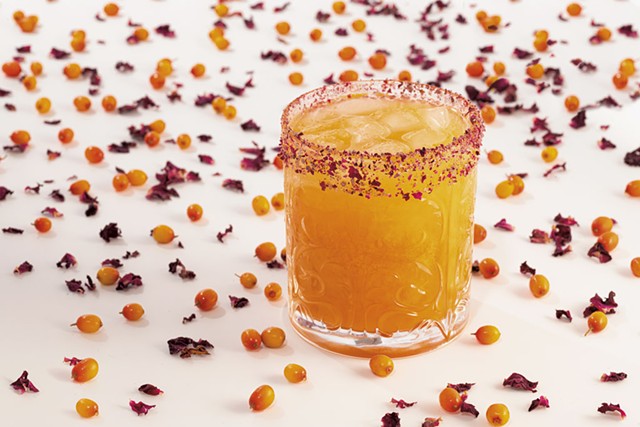 Taylor, who has worked with Wolfpeach for two seasons, said Genadio-Allen has been “a great hype girl” for Generation Herb; her products make it easier to market the dried medicinal herbs that Taylor produces.

“It’s not a clinical remedy as much as it’s this experience of the landscape around you,” Taylor said of the Wolfpeach line. “That’s such a helpful voice to have repping the plants that I grow.”

For this year’s batch of Nectar of the Gods, Genadio-Allen sourced 2,000 pounds of sea buckthorn berries — as much as Buzz Ferver of Perfect Circle Farm in Berlin could harvest — and stored it in borrowed freezer space. The raw apple cider vinegar, made with wild and heirloom varieties, comes from Neil Hochstedler’s Side Hill Cider Mill in Vershire.

“I’m just alchemizing the things,” Genadio-Allen said. The farmers, in her view, are “really doing the magic.”