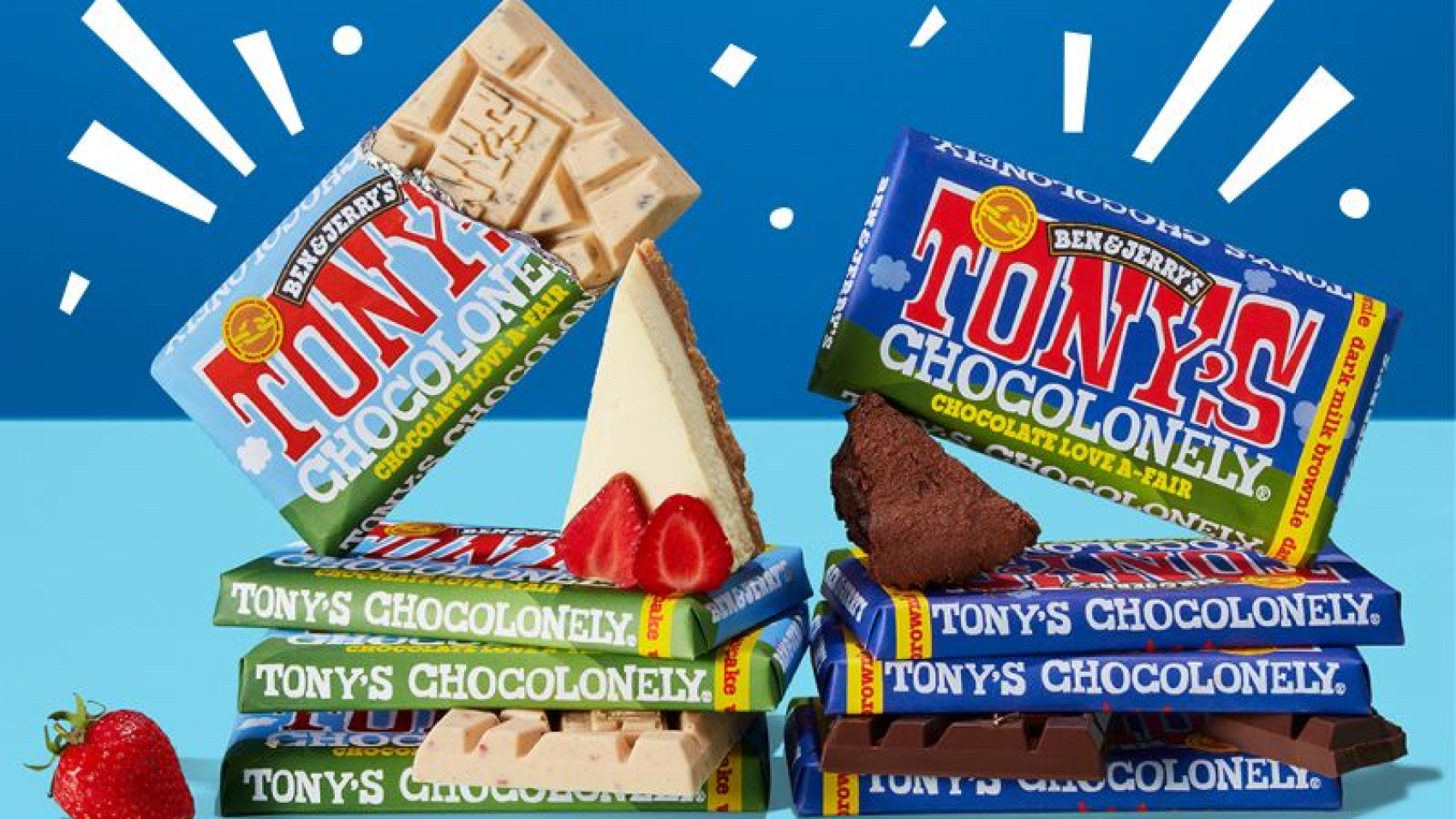 Impact brand Tony’s Chocolonely has hailed the release of a venture with Ben & Jerry’s, which has signed up to its core ethical cocoa sourcing principles, with special edition Strawberry Cheesecake and Chocolate Fudge Brownie chocolate bar flavours inspired by the ice cream group, reports Neill Barston.

The move had been announced last September, but as the Dutch-founded business noted in its annual report, its release was been delayed as it had been unable to make chocolate for two months late last summer in the wake of a salmonella outbreak at its sourcing partner, Barry Callebaut – which confirmed none of the affected supplies reached any of its external partners from its Wieze production facility in Belgium.

As part of Tony’s latest venture, its new mission partner, ice cream brand Ben & Jerry’s has released a new flavour Chocolatey Love A-Fair, based on on of Tony’s notable products, a milk caramel sea salt bar. As previously reported, the  cocoa beans from these brand-new chocolatey treats are sourced through Tony’s Open Chain, which helps companies take steps to end modern slavery and child labour in the chocolate industry.

The potential impact of the new chocolate releases from Tony’s was discussed as part of a presentation by the company at our recent World Confectionery Conference, which will be returning once again to Brussels in September.

Speaking on its release, Joke Aerts, Tony’s Chocolonely open chain lead, commented: “In 2022, Ben & Jerry’s joined Tony’s Chocolonely in Tony’s Open Chain. We are thrilled to have this motivated, vocal, social justice-focused mission ally helping us eradicate modern slavery in the cocoa supply chain. I am super proud of this collaboration and what we are doing in Côte d’Ivoire with the co-operatives.”

As previously reported, Ben & Jerry’s already pays farmers a Fairtrade Premium for their cocoa beans through an ongoing partnership with Fairtrade, and boosts this further by paying a Living Income Reference Price. As part of Tony’s Open Chain, Ben & Jerry’s will now also commit to Tony’s 5 Sourcing Principles which means, among other things, also paying a fee to further support the partner co-operatives in Ivory Coast.

As a Mission Ally of Tony’s Open Chain, and by beginning their conversion to buying cocoa directly from eight partner co-operatives in Côte d’Ivoire, Ben & Jerry’s will not only get to know which farmers produce the beans that go into their chocolatey ice cream, but also under which social and environmental circumstances. As Tony’s noted, delivering as high a level of traceability and transparency of the cocoa supply chain is crucial to provide social justice for cocoa farmers.

“We began this journey seven years ago, when we first partnered with Fairtrade co-ops in Ivory Coast, and this is the exciting next step in our cocoa journey as we amplify our commitment to farmers, equity, and ethical sourcing,” said Cheryl Pinto, Ben & Jerry’s Global Head of Values-led Sourcing. “Tony’s Open Chain enables us to combine traceability with sourcing principles that naturally align to Ben & Jerry’s mission and supports cocoa farmers to meet high standards on social and environmental practices while strengthening their co-operative.”