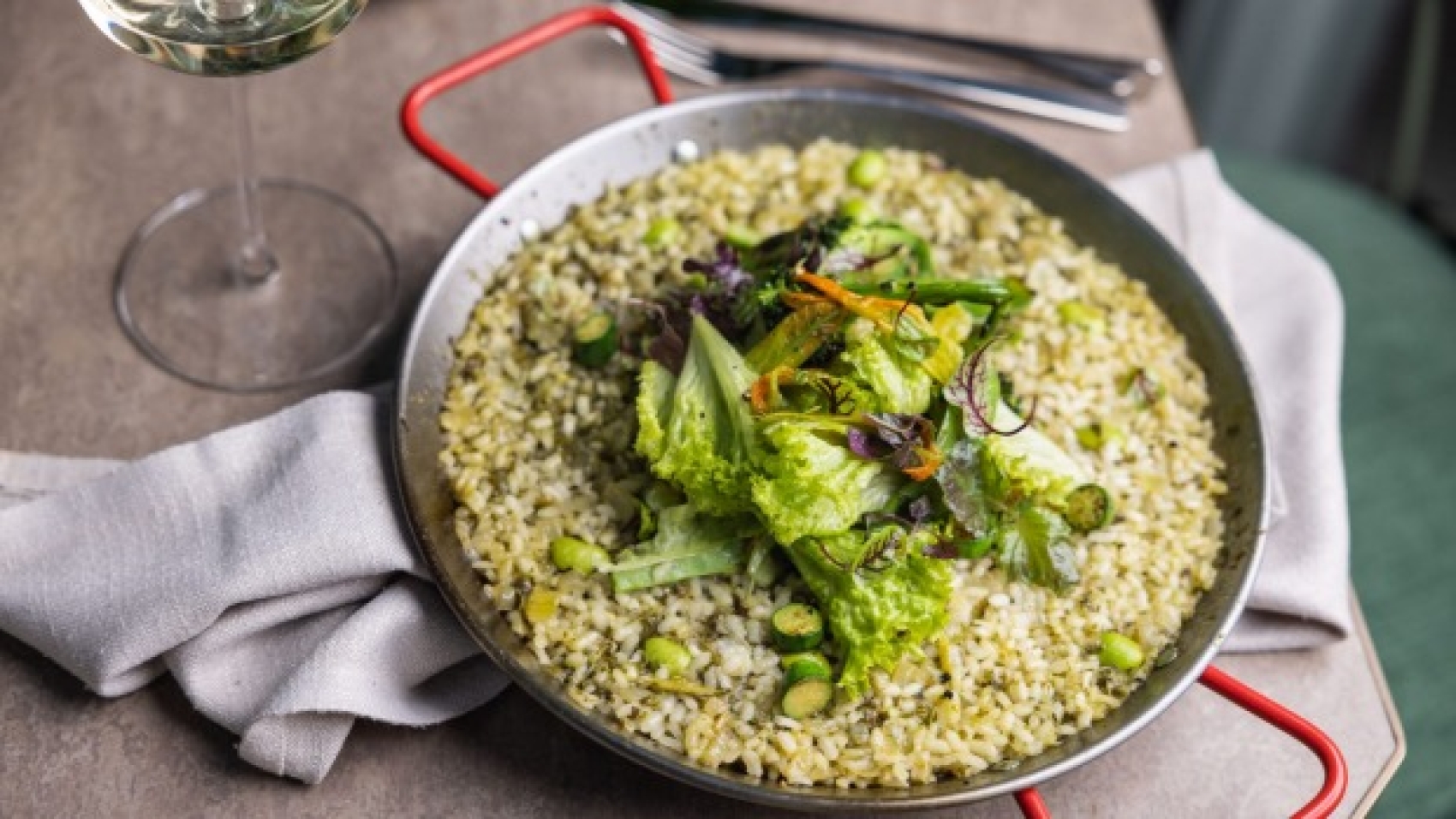 “I’m really looking forward to giving it the Smith & Daughters touch, bringing in some cult favourites that our friends and fans travel across the country for,” Martinez says.

“[Alibi] has always been a real trailblazer for plant-based food in Sydney, not to mention Australia,” Martinez says. “We’re just taking it up a notch and giving it a little facelift.”

The restaurant is Martinez’s second collaboration with the hotel group, following the opening of the one-hatted, Latin-focused Lona Misa at Ovolo South Yarra.

New Sydney-only dishes, such as chamomile spaghettini ($27) and summer paella ($35), were developed to complement the Smith & Daughters classics.

“While I’m definitely staying true to the flavours and style of cooking I’m known for, we have introduced some new flavours and a slightly lighter approach,” Martinez says.

Get the latest news and updates emailed straight to your inbox.

“An example of this is the summer paella with salsa verde. Usually, a paella is more robust and on the comforting side, however we’ve taken on Sydney’s vibe and created a vibrant, fresh dish that people will really enjoy.

“Sydney has room for some more plant-based options, especially on this level, so it’ll be great to be a part of this movement.”

Martinez says she has taken years to perfect her vegan dishes, with the tortilla, an egg-based Spanish tapas, presenting a particular challenge.

“Funnily though, it’s the simple things that are the hardest! You don’t have anywhere to hide with the simple items, so you really have to nail them,” she says.

“[The Spanish tortilla] only has three ingredients, but when the usual ingredients are 80 per cent non-vegan, you’re very exposed.

“Growing up on this dish, it was really important for me to get it right. It might be the simplest dish but it’s the one I’m most proud of.”

With Martinez based in Melbourne, the menu will be executed by chef Jiwon Do, formerly of Hippopotamus Restaurant & Bar in Wellington. Which three dishes would you recommend ordering?

Martinez: 1. Cacio e pepe is a real standout. The original dish is basically just butter and cheese, [but] we made it vegan. It is so delicious and I’m really proud of it.

2. The tiramisu ($18): It’s just one of those dishes I can’t take off the menu at S&D, and I imagine it’ll be the same here. When I announced on Instagram that I’m coming to Sydney as part of the Alibi relaunch, the most asked question from my followers was “Are you bringing the tiramisu!?”

3. I can definitely see the chamomile spaghettini being a big hit. This is a pasta dish that’s cooked in chamomile tea, meaning the spaghettini soaks up these incredible flavours. The dish also features summer squash, saffron and a ricotta made from almonds – a beautiful summer dish for the Sydneysiders! Gualdi:I’d recommend The Lord of Modena – it’s a beautiful and elegant take on a traditional Martini, with a touch of balsamic vinegar glaze from Modena.

For something on the lighter side, the Palermo Vibez is a refreshing rum-based cocktail that includes seasonal fruits and is presented with an edible pandan paint which gives a nutty aroma, designed to trick your palette with a surprisingly fresh flavour profile.