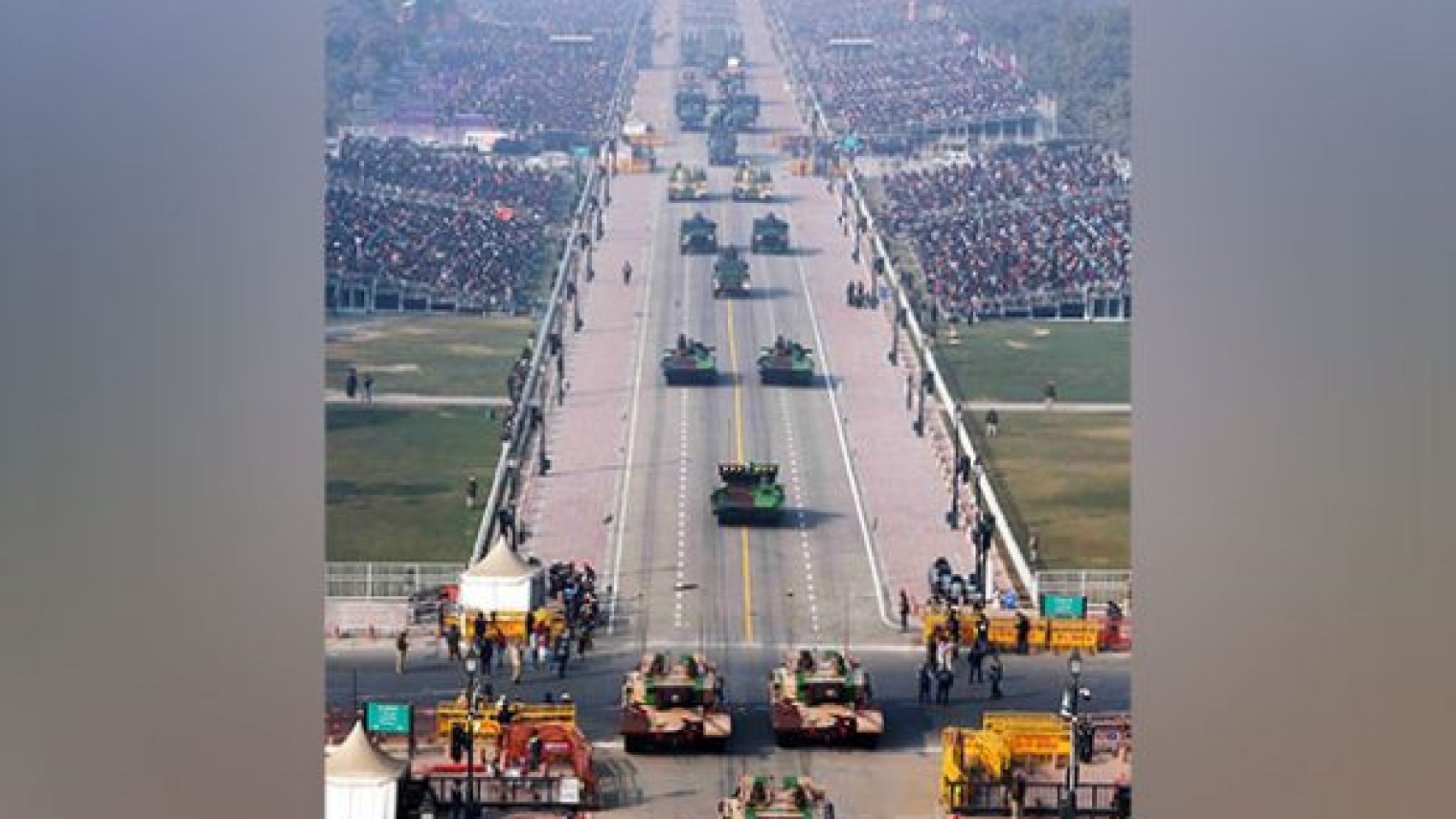 President Droupadi Murmu will lead the Nation in celebrating Republic Day from Kartavya Path in New Delhi on January 26, 2023.

Egyptian President Abdel Fattah El-Sisi will be the Chief Guest at the parade.

The events will culminate on 30th January, which is observed as Martyrs’ Day.The celebrations are marked by attractive performances from Vande Bharatam group of dancers from across the country, tales of bravery by Veer Gatha 2.0 participants, melodious performances by School Bands at the National War Memorial, the first-ever e-invitations, the largest-ever drone show and 3-D anamorphic projection.The Parade

The Republic Day parade, which will begin at around 1030 hrs, will be a unique mix of the country’s military prowess and cultural diversity, depicting the country’s growing indigenous capabilities, Nari Shakti and emergence of a ‘New India’.The parade ceremony will commence with Prime Minister Narendra Modi visiting the National War Memorial. He will lead the nation in paying solemn tributes to the fallen heroes by laying a wreath. Thereafter, the Prime Minister and other dignitaries will head to the saluting dais at Kartavya Path to witness the parade.

It replaces the vintage 25-pounder gun, reflecting upon the growing ‘Aatmanirbharta’ in defence. Four Mi-17 1V/V5 helicopters of 105 Helicopter Unit will shower flower petals on the audience present at Kartavya Path.The parade will commence with the President taking the salute. The parade will be commanded by Parade Commander, Lieutenant General Dhiraj Seth, Ati Vishisht Seva Medal, a second-generation Army officer. Major General Bhavnish Kumar, Chief of Staff, HQ Delhi Area will be the Parade Second-in-Command.The proud winners of the highest gallantry awards will follow.

They include the winners of Param Vir Chakra and Ashok Chakra. Param Vir Chakra winners Subedar Major (Honorary Captain) Bana Singh, 8 JAK LI (Retd); Subedar Major (Honorary Captain) Yogendra Singh Yadav, 18 Grenadiers (Retd) & Subedar (Honorary Lieutenant) Sanjay Kumar, 13 JAK Rifles and Ashok Chakra winners Major General CA Pithawalla (Retd); Colonel D Sreeram Kumar and Lieutenant Colonel Jas Ram Singh (Retd) will follow the Deputy Parade Commander on Jeeps. The Param Vir Chakra is awarded for the most conspicuous act of bravery and self-sacrifice in the face of the enemy, while the Ashok Chakra is awarded for similar acts of valour and self-sacrifice but, other than, in the face of the enemy.Egyptian contingent

The first contingent in the uniform of the 61 Cavalry will be led by Captain Raizada Shaurya Bali. The 61 Cavalry is the only serving active Horse Cavalry Regiment in the world, with the amalgamation of all the ‘State Horse Units’.

Another highlight of the parade this year will be Veterans’ Tableau, with the theme ‘Towards India’s Amrit Kaal with Resolve – A Veterans’ Commitment’. It will provide a glimpse of veterans’ contributions in the last 75 years and their initiatives in shaping India’s future during ‘Amrit Kaal’.Indian Navy Contingent

The Indian Navy contingent will comprise 144 young sailors, led by Lt Cdr Disha Amrith as Contingent Commander. For the first time ever, the marching contingent consists of three women and six Agniveers. It will be followed by the Naval Tableau, designed on the theme ‘Indian Navy – Combat Ready, Credible, Cohesive and Future Proof’. It will showcase the multi-dimensional capabilities of the Indian Navy, Nari Shakti and key indigenously designed and built assets under ‘Aatmanirbhar Bharat’.The forward part of the tableau will illustrate the women aircrew of Dornier aircraft, highlighting all-women crew surveillance sortie undertaken last year. The main section of the tableau will display the ‘Make in India’ initiatives of the Navy. There will be a model of the new indigenous Nilgiri class ship with a Dhruv helicopter deploying marine commandos. On the sides, models of indigenous Kalvari class submarines will be depicted. The rear section of the tableau will display models of autonomous unmanned systems being indigenously developed under the iDEX-Sprint Challenge.Indian Air Force Contingent

Defence Research & Development Organisation (DRDO) will showcase one tableau and equipment. The theme of the tableau is ‘Securing Nation with Effective Surveillance, Communication and Neutralising Threats’. The first part shall display Underwater Surveillance Platforms, which include sonars like Ushus-2 for submarines, the Humsa series of sonars for ships and the Low-Frequency Dunking Sonar for helicopter launch surveillance.

The Indian Coast Guard (ICG) marching contingent will be led by Deputy Commandant Rohit Singh. The ICG, with 157 ships and 78 aircraft, is capable of countering threats at and to the sea. The continuous vigil of the ICG has enabled the seizure of contraband worth over Rs 14,546 crore since its inception, including Rs 2,620 crore in 2022 alone. Its reach and capability were demonstrated during the flag hoisting on 100 inhabited and uninhabited far-flung islands as part of ‘Azadi ka Amrit Mahotsav’. The ICG has been a pioneer in women’s empowerment, offering opportunities to women officers in all spheres.Contingents of CAPF and Delhi Police

Also marching down Kartavya Path will be the contingents of the Central Reserve Police Force (CRPF) led by Assistant Commandant Poonam Gupta; the Railway Protection Force led by Assistant Security Commissioner Saurav Kumar and the Delhi Police led by Assistant Commissioner of Police Shweta S Sugathan. The Camel Contingent of Border Security Force (BSF) will march past the saluting dais under the command of Deputy Commandant Manohar Singh Kheechee. For the first time, female camel riders will participate in the parade, showcasing women’s empowerment in various fields.NCC Contingents

Pradhan Mantri Rashtriya Bal Puraskar is conferred on children with exceptional abilities and outstanding achievement in the fields of bravery, art & culture, sports, innovation and social service. Eleven winning children, in jeeps, will be driven down Kartavya Path.

Details of the 17 tableaux of States/UTs with their themes are as follows:

Assam- Land of Heroes and Spiritualism

Tripura- Sustainable Livelihood through Tourism and Organic Farming in Tripura with the active participation of women.

Details of six tableaux of Ministries/Departments are as follows:

Cultural performances by 479 artists chosen through the nationwide Vande Bharatam dance competition will add colour and groove to the Republic Day parade. The theme of the cultural extravaganza will be ‘Nari Shakti’ presented by 326 female dancers, ably supported by 153 male dancers, of the age group 17-30 years. They will present classical, folk and contemporary fusion dances, depicting the ‘Power of Women’ through five elements Earth, Water, Air, Space and Fire. This is the second time that the dancers of the cultural programme have been selected through a Nationwide competition.Motorcycle Display

Another highlight of the show will be a thrilling motorcycle display by the Corps of Signals’ Dare Devils team. They will enthral the audience with an array of formations, which will also include a Yoga display.

The grand finale and the most eagerly-awaited segment of the parade, the Fly Past, will witness a breathtaking air show by 45 aircraft of the Indian Air Force, one from the Indian Navy and four helicopters of the Indian Army. Vintage, as well as current modern aircraft/helicopters like Rafale, MiG-29, Su-30, Su-30 MkI Jaguar, C-130, C-17, Dornier, Dakota, LCH Prachand, Apache, Sarang& AEW&C, will roar in the skies above Kartavya Path, displaying different formations, including Baaz, Prachand, Tiranga, Tangail, Vajrang, Garud, Bheem, Amrit and Trishul. The concluding Vertical Charlie manoeuvre will be performed by Rafale fighter aircraft.Like last year, Doordarshan will broadcast cockpit videos during the flypast. The ceremony will culminate with the national anthem and the release of Tri-colour balloons.Special Invitees

This year, invites have been sent to common people from all walks of society such as Shramyogis involved in the construction of Central Vista, Kartavya Path, New Parliament Building, milk, vegetable vendors, street vendors etc. These special Invitees will be prominently seated at Kartavya Path.Unique activities

A number of unique activities formed part of Republic Day Celebrations this year. These are:1. Military Tattoo & Tribal Dance festival: As part of RDC and to mark the 126th birth anniversary of Netaji Subhas Chandra Bose (celebrated as Parakram Diwas), a Military Tattoo and Tribal Dance festival ‘Aadi-Shaurya – Parv Parakram ka’ was organised at Jawahar Lal Nehru Stadium, New Delhi on January 23 and 24, 2023. Thousands of people were enthralled by 10 Military tattoos and 20 Tribal Dance performances. The event was interspersed with performances by famous Bollywood playback singer Shri Kailash Kher.

2. Vande Bharatam 2.0: The second edition of the Vande Bharatam dance competition was organised as part of RDC 2023. Entries were sought from October 15 – November 10, 2022, from participants in the age group of 17-30 years in the genres of Folk/Tribal, Classical and Contemporary/ Fusion. State/UT-level and Zonal-level competitions were conducted from November 17 to December 10, 2022, by the seven Zonal Cultural Centres under the aegis of the Ministry of Culture. The Grand finale was held in New Delhi on December 19 and 20, 2022 and witnessed the participation of 980 dancers.

3. Veer Gatha 2.0: Veer Gatha, one of the unique projects launched as a part of ‘Azadi Ka Amrit Mahotsav’ last year, was organised to inspire and spread awareness among children about the gallant deeds and sacrifices of the Armed Forces. This year too, the Tri-Services organised virtual and face-to-face interaction of school children with Gallantry Award winners and the students (from 3rd to 12th Standard) submitted their entries in the form of poems, essays, paintings, multimedia presentations etc. More than 19 lakh entries were received from all over the country out of which 25 were selected as winners. They were felicitated by Raksha Mantri at a ceremony in New Delhi on 25th January. They shall also attend the RD parade.

5. E-invitation: This year, physical invitation cards for guests and spectators have been replaced by e-invitations. A dedicated portal www.amantran.mod.gov.in was launched for the purpose. Sale of tickets, admit cards, invitation cards and car parking labels have been issued online through this portal. This ensured the whole process was more secure and paperless and enabled people from all parts of the country to attend this national event.

6. School Band Performance at NWM: An All-India School Band competition was organised for various schools to compete and perform in the run-up to Republic Day to encourage values of discipline, teamwork & national pride among the children. Over 300 schools participated in the competition organised by the Ministry of Defence in coordination with the Ministry of Education. Eight school bands were selected, which performed at the National War Memorial from January 15-22, 2023. Prince Academy of Higher Education, Sikar, Rajasthan was adjudged as a winner in both girls’ and boys’ Brass band categories. In the Pipe Band category, Thurbo Higher Secondary School, Darjeeling, West Bengal bagged the top spot in the boys’ section, while Government Girls Secondary School, Namchi, South Sikkim were named winner in the girls’ section.

7. Drone Show: The biggest drone show in India, comprising 3,500 indigenous drones, will light up the evening sky over the Raisina hills during Beating The Retreat ceremony on January 29th, weaving myriad forms of national figures/events through smooth synchronisation. It would depict the success of the start-up ecosystem, and the technological prowess of the country’s youth and pave the way for future path-breaking trends. The event will be organised by M/s Botlabs Dynamics.

8. Anamorphic Projection: For the first time, a 3-D anamorphic projection will be organised during the Beating the Retreat Ceremony on the facade of the North and South Block. (ANI)

(This is an unedited and auto-generated story from Syndicated News feed, LatestLY Staff may not have modified or edited the content body)